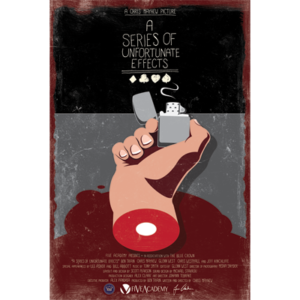 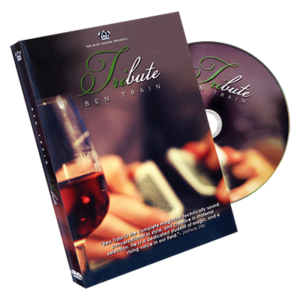 1 × Tribute by Ben Train and The Blue Crown DVD

Such an incredible deal! Buy one, get one FREE!
You’re basically getting 2 DVD’s for the price of one! Can’t beat that ANYWHERE!

Dealing with a mix of wacky personalities, including eccentric magicians and crazed card collectors, Chris and Ben go on a quest to learn the real secrets of magic.

After witnessing an amazing magic trick performed by the world-famous Lee Asher, Chris enlists his friend Ben’s help to discover the secret.

They soon discover though that learning the secrets to magic aren’t as easy as they once thought. Chris and Ben need to help Lee find something he’s looking for before he’ll share the secret with them. In order to do that they have to go through magicians Jeff Hinchliffe, Glenn West, and Chris Westfall, while avoiding destruction at the hands of crazed card collector Bill Abbott on a wild adventure filled with laughs and great card tricks.

More than just another instructional DVD:
Eight powerful routines using nothing more than a regular deck of cards.
A 90 minute feature length film, including a laymen cut (45min) so you can watch it with your non-magician friends and family.
Spend time learning from incredible magicians like: Ben Train, Chris Mayhew, Jeff Hinchliffe, Chris Westfall, and Glenn West.
Special appearances by Bill Abbott and Lee Asher.
Includes a 40+ page booklet filled with stories, fun facts about the cast & crew, and two routines not taught on the DVD but performed in the movie.
Bursting with extra features including: Director’s commentary, hilarious outtakes, and a 40 minute interview with Tom & Judy Dawson about collecting playing cards.
TRICK LIST

1. Lu Lu Lemon (Chris Mayhew) Based on Paul Harris’ La La’s Lu Lu, the magician openly isolates a face-down card among a fan of face up cards, then sets the packet aside. While displaying a different packet of cards, the magician asks the spectator to freely name any card they see. In a feat of ultra-coincidence, the original face down-card proves to be the exact card the spectator chose.

3. Wide Open Travelers (Glenn West) Like Ed Marlo’s The Open Travelers, four aces travel invisibly from the magician’s hand to the table. Each Ace’s journey becomes more impressive and impossible than the last. Did we mention only four Aces are used!?!

4. Detour on 51st Street (Ben Train) A pseudo demonstration of shuffle tracking. Two jokers randomly mixed into the pack swiftly find a selection lost earlier in the routine. This will have your spectators convinced you’re a professional gambler when it comes to tracking cards.

5. Harmony (Jeff Hinchliffe) Inspired by Dai Vernon’s Triumph, cards are shuffled face up and face-down creating a chaotic mess. A spectator picks a card, then the magician claims he can divine subtle pieces of information about the selection from simply mixing the pack. After a handful of shuffles, the selection is revealed face up among the rest of the face-down cards. As a kicker to prove an ultimate display of skill, the cards are turned over to reveal they are now all in new deck order.

6. Oil and Water (Jeff Hinchliffe) A fast-paced multi-phase routine where four red cards are fairly mixed with 4 black cards, but they keep mysteriously separating. Each phase escalates to an impossible climax that the spectators won’t see coming.

7. Training Wheels (Ben Train) A whimsically fun handling of an Ace production where the magician visually splits the Four of Spades into the four Aces in one seamless motion. So amazing and easy, people will want to chop off your hands to perform it.

8. Hold ’em Seductively (Chris Westfall) A Texas Hold ’em themed transposition based on Paul Harris’ Seductive Switch where the magician trades his lousy cards for better ones using his magical powers. After witnessing this routine, your friends will think twice before playing cards with you again.

TRIBUTE contains a hand-picked collection of card magic’s strongest ideas,updated and designed for a modern audience. Ben Train offers you three sophisticated routines used either as stand-alone pieces or that you can easily combine to form a powerful act. You’re holding more than a decade’s worth of thinking and studying, and your on your way to performing better magic.

Included on the DVD:

1. Bold Assembly (Running Time: 30 min)
Display the four aces by dealing them onto separate spots on the table. With almost no cover, the aces start vanishing one-by-one, leaving no trace behind. Eventually they reappear, found together in an impossible location.

2. The Myth (Running Time: 42 min)
Imagine taking your deck, letting someone shuffle it as much as they want, then cutting to an Ace. Every time! Learn the concept that’s experiencing a rebirth after almost several decades of lying dormant. No palming. No funny moves. No bull.